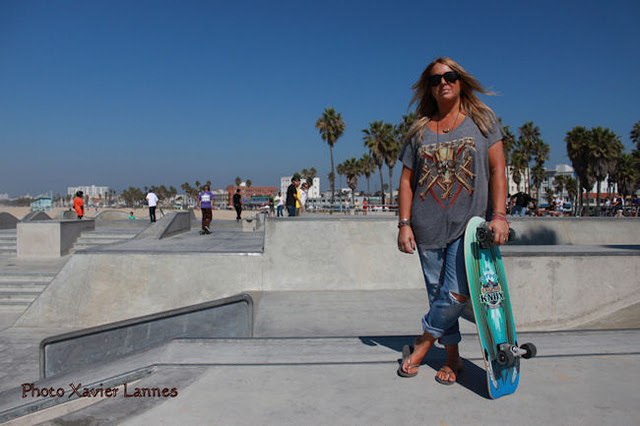 Design and photo by Xavier Llanes


“I first met Cindy Whitehead in the late 1970's at an L.A. skatepark, Marina Del Rey or Skatercross, I believe. She was decked out in the latest Sims Team outfit and putting her moves out there along the boys that she was busy jockeying for a drop-in into the bowl. Those that were there know what I'm talking about- a group of A-pesonality kids jacked up on sugar, surfing, skating and other things all trying to get a run before the next dude or girl, which was either Cindy or Vicki Vickers. Cindy would get her fare share of fun only by trash talking the bro's (which she's still quite good at!) then dropping in while their heads turned in puzzling astonishment. In the Dogtown days of yore one had to cut some pretty sharp teeth to be included into the pack and Cindy's were quite razorlike when necessary.

She was the token female on the LA team, aside from Edie Robertson in Santa Barbara and held her own in many locations. I have remained friends and in touch with her after skateboarding as we both went into the fashion industry to seek out new horizons and careers. She is still one of the top wardrobe stylists going and is always on the move, job after job. We've shared many laughs over our 30+ year friendship and I don't expect it to slow or stop anytime soon. She was a great skater, is a great stylist and a true friend whose shooting star trajectory has paralleled my own for years. Life is a trip and mine has certainly been enhanced by Cindy's friendship.”
Brad Bowman October 19, 2011.

So damn stoked to end my week with this!  "I Skate Therefore I Am" posted this interview with me today, as part of it's Girls Appreciation Month. I may piss off the boys with some of my "pro girl" comments, but what else is new?  Just remember - "Girls rule the pool". Ha!

And how damn cute is pro skater Brad Bowman, with his lengthy quote for me above? The guy shreds and I am very lucky to have people from skateboarding like him as my friends. xo

Check out more photos and the interview HERE.
Posted by Cindy Whitehead

Oh wow, this is exactly how I imagine you, Cindy. Girls rule the pool! yay

pretty cool! I love all the girl power inspiration you provide! your a bad ass and inspire me to be strong and do my thing.